There are dozens of American cities from coast to coast competing for the title of “The Next Big Tech Hub”. But what if competing to be the next Silicon Valley wasn’t the best, or only, strategy? Even though the pandemic has seen a shift in the tech space at large, it’s unlikely that anywhere will ever truly replace Silicon Valley and the Bay Area at the top. Instead, what if growing tech hubs focused on specialization? What if cities strived to become the national hub for robotics, healthcare, or marketing technology?

Future-focused cities can benefit from capitalizing on their existing strengths and creating an economic development strategy focused on a few tech industry niches, rather than tackling the sector as a whole. This allocates resources differently and creatively. Growing tech hubs across the country from the Midwest to the Mountain regions can focus on what has landed them success thus far in their tech journey, then attracting companies and talent that will further that vision.

Take Pittsburgh as an example. It is a thriving city for robotics companies. There is plenty of talent to recruit from nearby post-secondary institutions; the startup scene is active and competitive; and they are surrounded by industry peers that push them to research, innovate, and push the boundaries of what can be done in this industry. While the city will continue to try to bring companies and talent from all corners of the tech sector, focusing time, energy, and resources on growing the existing robotics ecosystem has a higher likelihood of success and better long-term outcomes for the city and regional economies.

Read more about how cities are creating their own unique identities and specializing in the niches of Big Tech in this edition of the MidPoint. 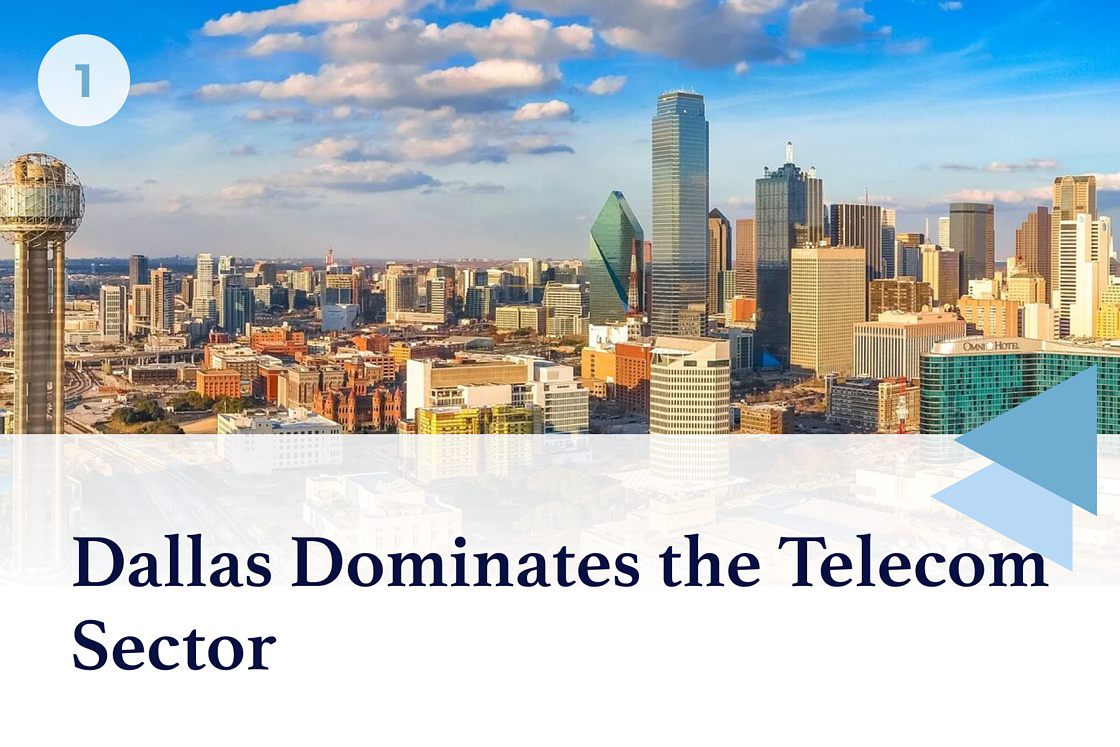 With innovative companies across the country working to supply the growing demand for expansive telecommunications infrastructure, Dallas is quickly becoming a Telecom Tech Hub. The Dallas-Fort Worth metro area houses several telecom-related companies, like MetroPCS, Fujitsu and Cisco Systems. This growing industry is a central pillar of the local economy and cultivated an ecosystem that has created integrated solutions for other sectors; for example, telecommunications solutions for the healthcare industry. Read More 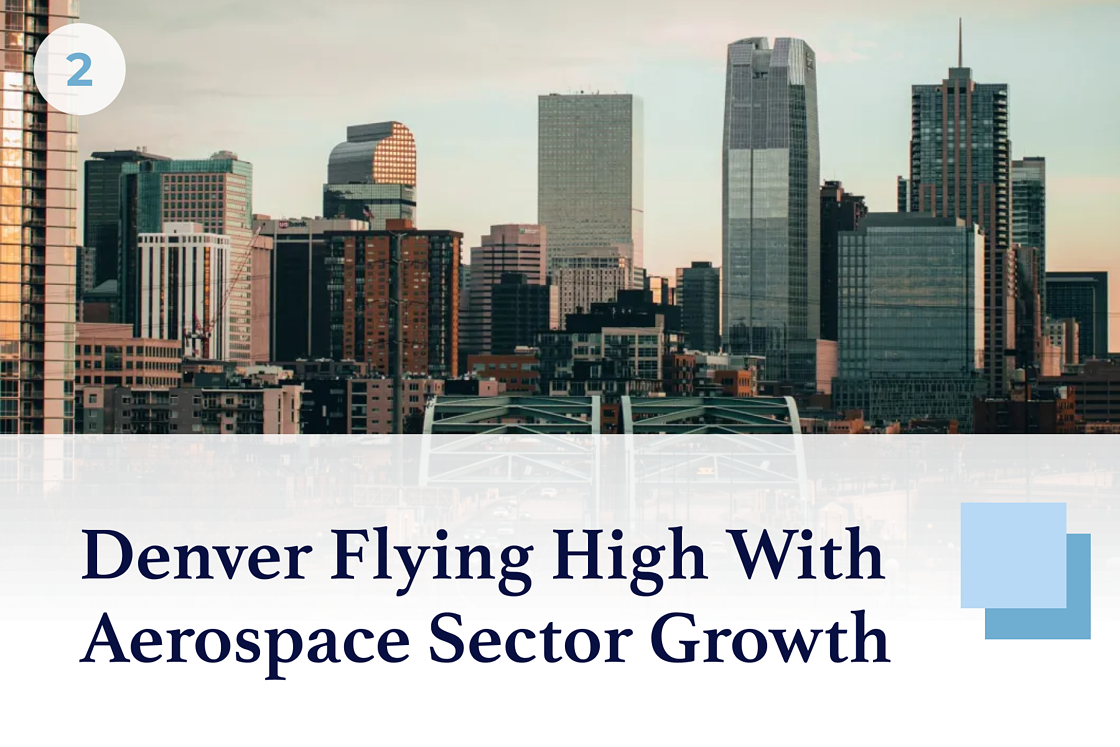 In recent years and across the country, there has been a major tech boom. This trend is especially evident in the aerospace sector, one of the largest sectors in the entire country. The aerospace sector helps supply resources for various related aviation fields, including space, commercial, and military. Concentrated on research and innovation, the tech sector has witnessed explosive growth, especially in recent years. As a result, the aerospace sector has contributed immensely to the American economy, so much as $151 billion in 2018 alone. Despite the pandemic, the aerospace sector was one of the very few businesses that continued to flourish amid last year’s pandemic. Self-reliant and self-resilient, this business shows no signs of stopping. Instead, the tech sector shows promising growth, a stable economy, and unlimited job growth. Read More 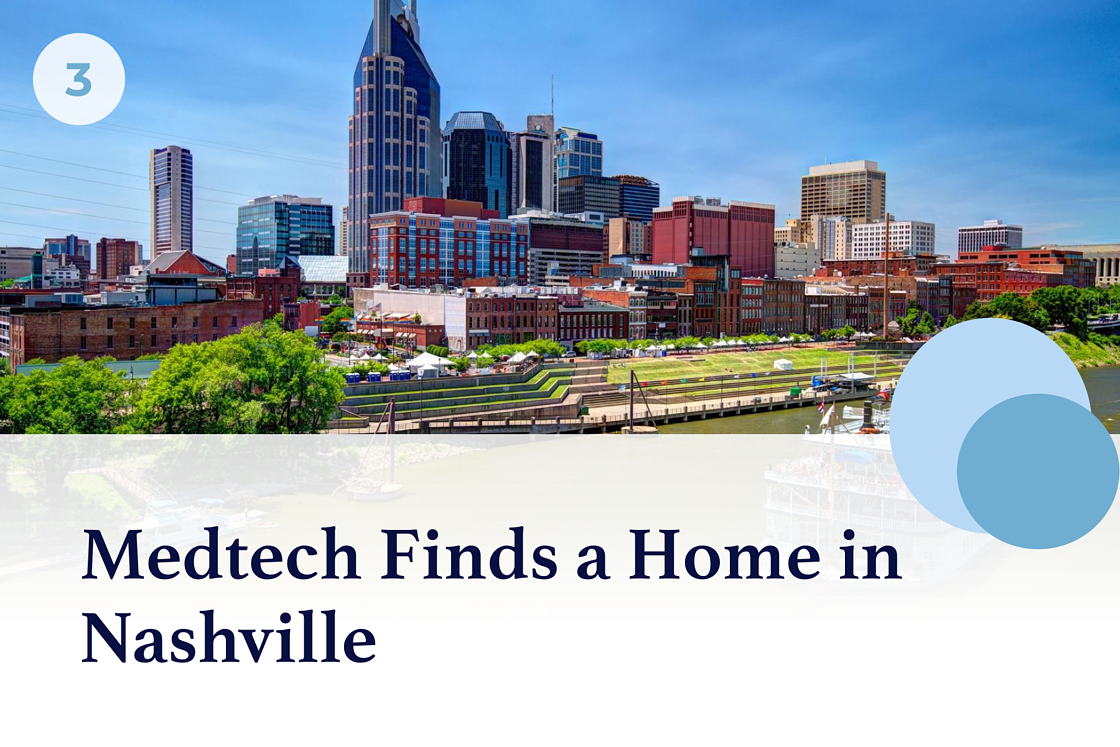 Healthcare has had a home to grow in Nashville since the 1960s, when the Hospital Corp. of America (HCA), Hospital Affiliates International (HAI) and General Care Corp. were established to bring together private healthcare providers for collaborative growth. These organizations have helped create the environment in which healthcare startups and innovative medical technology companies can build and scale their operations. To keep the momentum of innovation going in one of the fastest growing tech hubs in the U.S., public-private partnerships like Launch Tennessee enable the steady growth of this industry that has contributed nearly $47 billion to the local economy. Read more 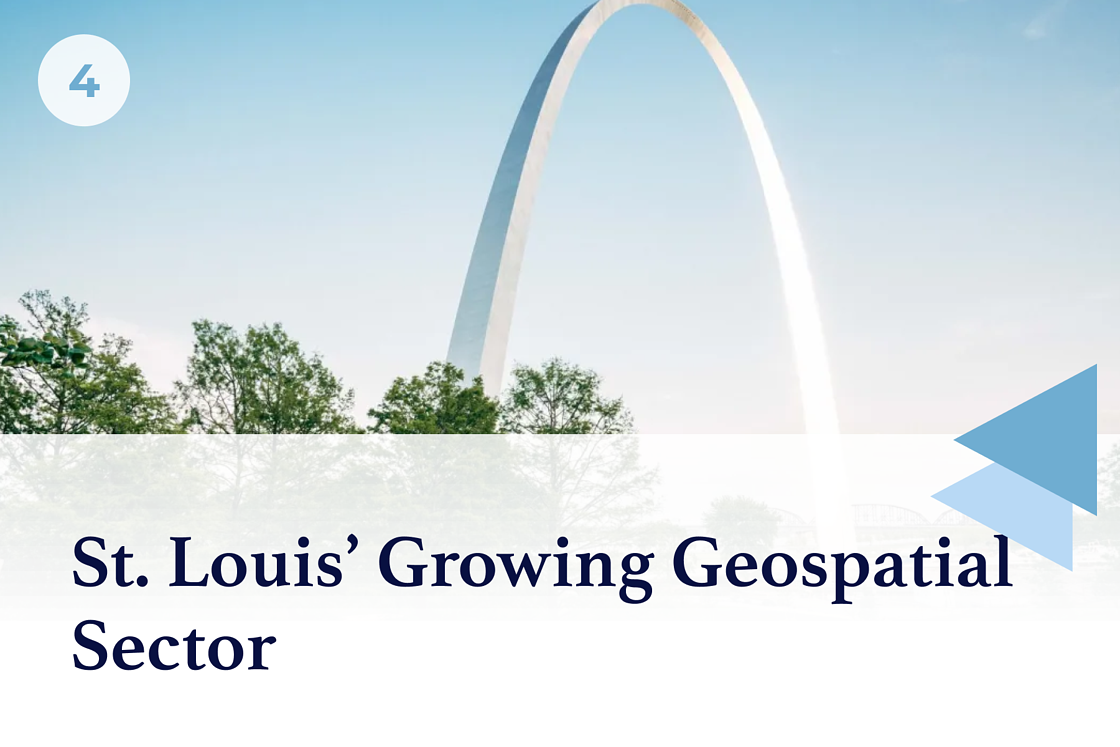 One sector that is seeing unprecedented growth and significant investment from the public and private sectors is geospatial technology. St. Louis is predicted to become a leader in geospatial technology, but this rise did not happen overnight. A few years ago, the National Geospatial Intelligence Agency announced a new headquarters in St. Louis. Now, there’s construction underway on an expansive 97-acre Next NGA West campus in the northern part of the city. Already, the rapidly growing sector is responsible for roughly 27,000 skilled jobs and nearly $5 billion of economic growth in the region. Read more 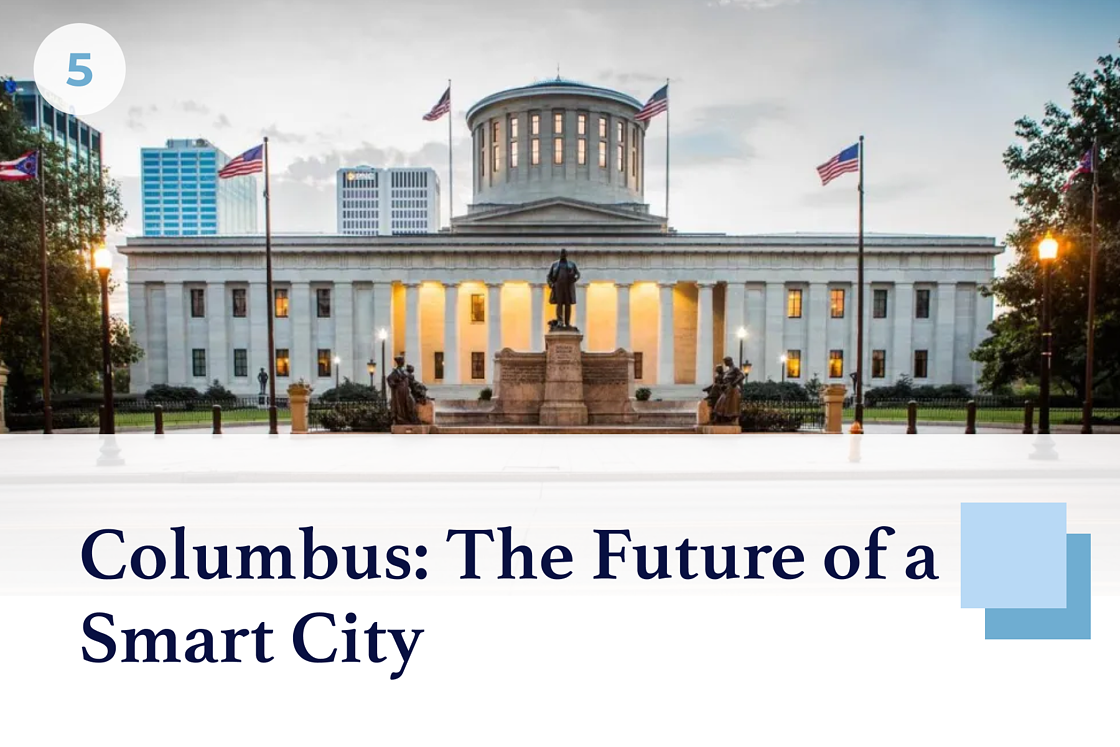 Columbus, like many mid sized American cities, is concerned with mobility. Studies have deemed Columbus the fastest-growing city in the Midwest, and this is only aggravating deeply rooted problems with congestion, disconnected neighborhoods, and steep single occupant vehicle commuter rates. Working smarter, not harder is a step in the right direction for Columbus. Mayor Andrew J. Ginther of Columbus, Ohio got at the core reasoning of why this city is aspiring to be the first in-depth Smart City when he said: “Transportation is not just about roads, transit and ride sharing. It’s about how people access opportunity. And how they live.” Read more 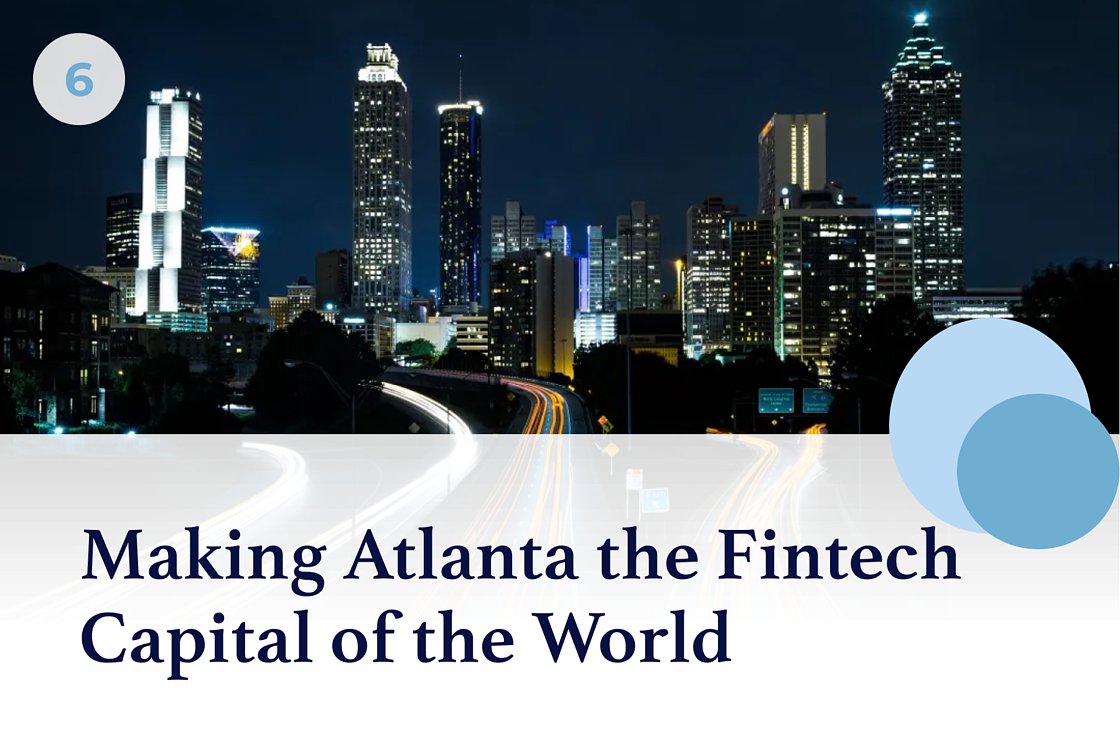 It may not be the first thing that comes to mind every time you use ApplePay to buy your coffee or Venmo your friend for booking that rental, but by doing so, you are participating in one of the most revolutionary innovations of our time. And, more likely than not, your transaction went through Atlanta.

Every year, trillions of dollars flow across payments systems managed by Georgia companies in the fintech capital of the world. Fintech, the cross-section between finance and technology, describes the industry that has made it easier to send, spend and manage money. Apps, websites and other digital platforms that help transfer funds, enable transactions, automate investing decisions and buy financial products are all part of what is considered fintech. Read more

A cofounder and Partner of MVP, Magarac Venture Partners. Will Allen is business executive, Nonprofit founder and Exceptional athlete with 10+ years of experience in managing high-performing teams, facilitating successful outcomes and investing.

Before Co-founding NGH, Mr. Allen played 12 years in the NFL with the Pittsburgh Steelers and Tampa Bay Buccaneers where he developed meaningful relationships with athletes, influencers, CEOs and brands.