How did Indy score a Salesforce HQ?

For a city whose name is often associated with sports, Indianapolis has surely built a name for itself as a Midwest tech hub over the last ten years. Look beyond the motor speedway, basketball courts, and state-of-the-art football stadium, and you’ll see the blue “Salesforce” sign glowing on the tallest building in Indianapolis. Notably, after acquiring ExactTarget, Salesforce set up shop with a headquarters that is second only to San Francisco as the largest office.

Sometimes, it can be hard to recognize the point when a city transforms into a tech hub, but for Indianapolis, many leaders would agree that there was a pretty clear moment. When Salesforce announced its investment in the city, it was not long after that others followed. About a month later, information-technology powerhouse Infosys selected Indianapolis for its U.S. headquarters, committing to hiring 2,000 employees over a period of years. After that, the Rise of the Rest startup competition came to town in the fall of 2017. The road show was designed by an AOL exec to champion tech companies outside Silicon Valley. Indianapolis sold out every event, attracted a record number of applications and entries, and ended with more finalists than in any other city on the tour.

So how did Indy score a Salesforce HQ? 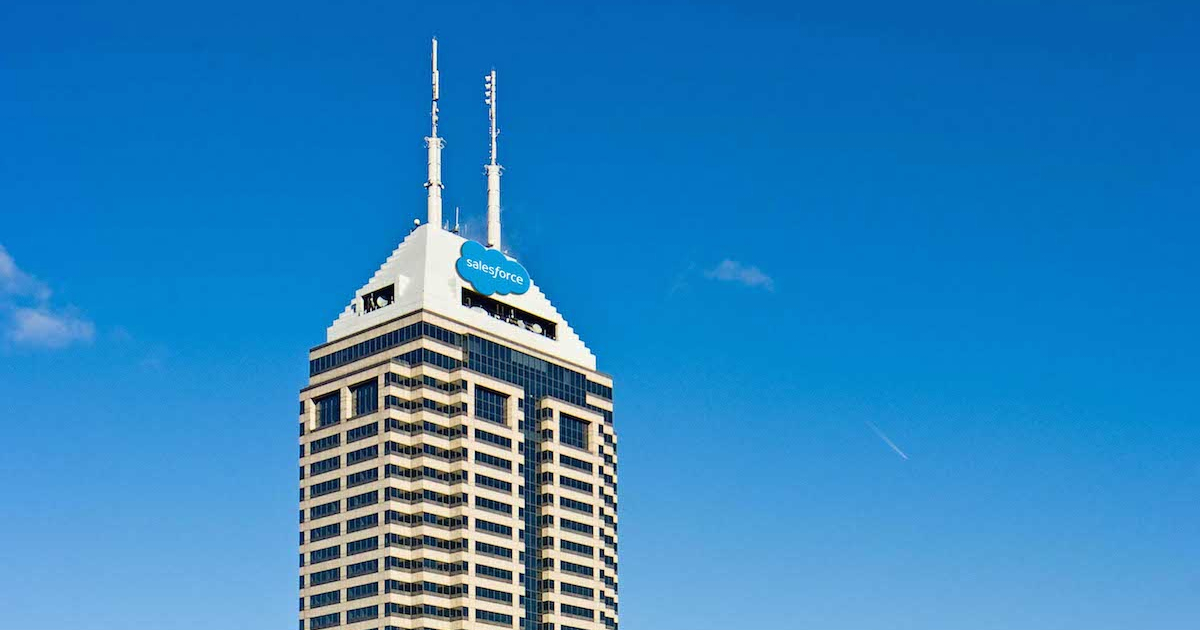 In many ways, Indianapolis quietly worked its way into the tech industry. It got its first big tech entry in 1997 when IBM acquired Indianapolis based Software Artistry for $200 million. But this was just the beginning, and having a local company succeed like that does not always create success for the tech community at large.

A similar storyline applies to ExactTarget, but the success is multiplied, making it the epitome of homemade success in Indianapolis. The company was started in 2000, long before Indianapolis became a hot spot for tech companies. But it’s dedicated and experienced founders created something valuable, and in 2012 it was purchased by Salesforce for over $2 billion dollars, the biggest tech acquisition the city had seen. ExactTarget’s buyer, saw potential in Indianapolis when it made the acquisition. Founder, chairman, and co-CEO of Salesforce Marc Beinoff said of the ExactTarget acquisition: “We knew we were acquiring a great company, but soon came to realize we were also becoming part of a great state and community. Indiana is one of the best states in which to do business, and the state’s Hoosier hospitality is legendary.

Making a decision to open up heavy operations in Indianapolis was made easier because of some of the features that make talent attraction and retention easier. These are centered around quality of life. As the competition for talent in the tech sector continues to heat up across the nation, cities like Indianapolis stand out with unusual features.

In Indianapolis, a relocated tech employee is trading mountains or nearby oceans for low costs of living and affordable housing. Research shows that a tech worker would have to make $272,891 in San Francisco to approximate a $100,000 annual salary in Indianapolis. Real estate is about a third the cost of San Francisco’s and the average employees in Indiana stay twice as long as those in the Bay Area.

Salesforce also saw an intricate college and university system that grows talent in the region. Indianapolis boasts a large number of top business, science and engineering schools nearby. Indiana University, Purdue, Butler, Rose-Hulman and DePauw, graduate a large number of highly capable graduates that Salesforce and other migrating tech companies can tap into. Ivy Tech, the largest community college system in the US is also producing a pipeline of graduates with technical know-how and a clear pathway into the industry.

Salesforce, Kronos, Infosys, and others do not bring all the talent they need with them. Sure, there will be some that move for the opportunity, but large tech companies are looking for cities that can meet their talent needs. In Indianapolis, Salesforce found that pipeline and continues to invest in ways to grow it – whether it be in its FutureForce program for interns and new college grads or its Pathfinder program for improving employee diversity of skills and backgrounds. 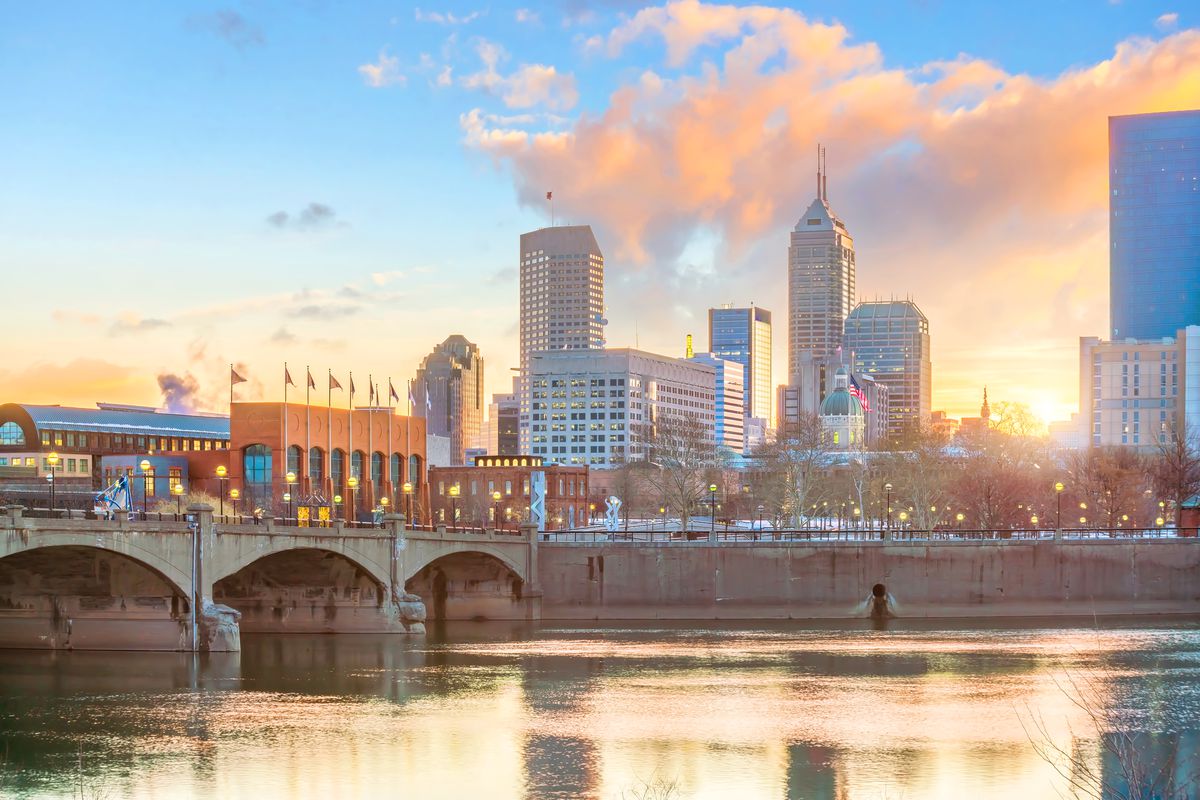 A growing start-up and scale-up scene is emerging in Indianapolis as business and government leaders work together to put together incentive packages and new opportunities for capital. “I’ve never found a parallel of another city and state where government and business are working so closely together to move an ecosystem forward,” Scott Dorsey, co-founder of ExactTarget, told VentureBeat in an interview.

When a company sees the intentional collaboration between local and state government, nonprofit and for-profit sectors, and more, it makes an appealing case for investment and economic development. Leaders have already hyped up the city for the future as a tech hub, so the community buy-in is mostly there. Tech execs can’t ask for much more than that.

One employee who moved to Indy wrote, “I’m pleasantly surprised by how easy it’s been to embrace Indy! I love the friendly midwestern vibe, the countless great food spots, inexpensive housing options, and awesome museums… There’s also a number of biking and walking paths, and always something affordable and fun to do around the city.”

There are other perks as well. Companies doing business in Europe appreciate the Eastern Time Zone. The nickname “Crossroads of America” is due to its centrality in the Midwest. Residents can drive to Chicago, Cincinnati, Louisville, Columbus, and Detroit in less than four hours. Its world class and award-winning airport boasts national connectivity and growth in the International sphere. Indianapolis can compete for larger tech companies for many reasons as these companies look to expand. It really paints a bright future for this growing hub.

If your company is thinking about relocating or opening a second office, One America Works can help!